Where will the Euro, the Dollar, the Dow and gold end up in June?
Will Au(Gold) hit 1400, or the Euro find parity with the Dollar? Will the Dow dip below 900? 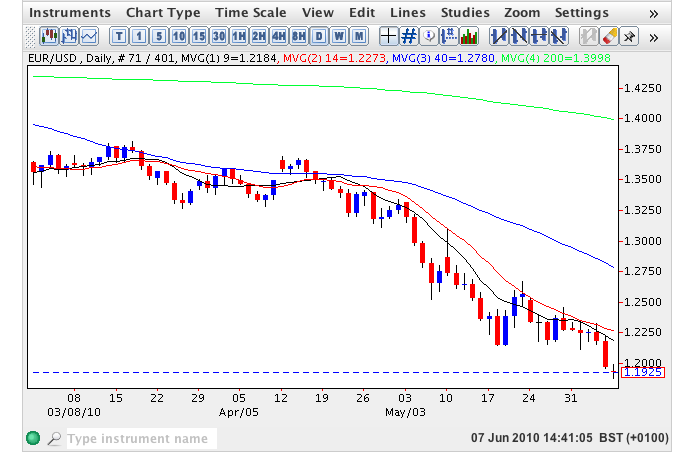 PPP: Purchasing Power Parity is a 4 centuries old concept that tries to decide the absolute value of a unit of goods across international boundaries such as bushel of wheat.

The Euro moves towards parity according to Kit R. Roane a Fortune magazine contributor Based on IMF estimates of 2008 GDP and purchasing power parity among the various currencies, the euro zone is the second largest economy in the world. There are marked differences between PPP and market exchange rates.
The Euro’s rapid decline could be caused by the €1 trillion bail out of Greece and shoring up of weaker EU economies such as Portugal, Italy and Spain.
Germany’s surprising ban on short selling pressured traders to short the Euro, in a report by William L. Watts of MarketWatch, Steven Barrow, currency strategist at Standard Bank said: “If the market can’t vent its frustration by selling euro-zone government bonds or [credit default swaps], it will sell the euro, no matter that the market already seems very short.”
The ban prohibits market participants from naked short selling of euro-zone government bond markets and from purchasing credit default swaps, or CDSs, on government debt unless they own the underlying bonds.

The ripples from a weak EU economy quickly affects markets in Asia and North America, slowing down the recovery from this recession.

Why are we talking Euros? Because results of this week’s primaries did not capture Wall Street trader’s attention the Euro has. We pour money along Germany to saving Greece while England may not have to, considering that the UK has no stake in the euro the crisis affects the U$A strongly straight into our pocket books.